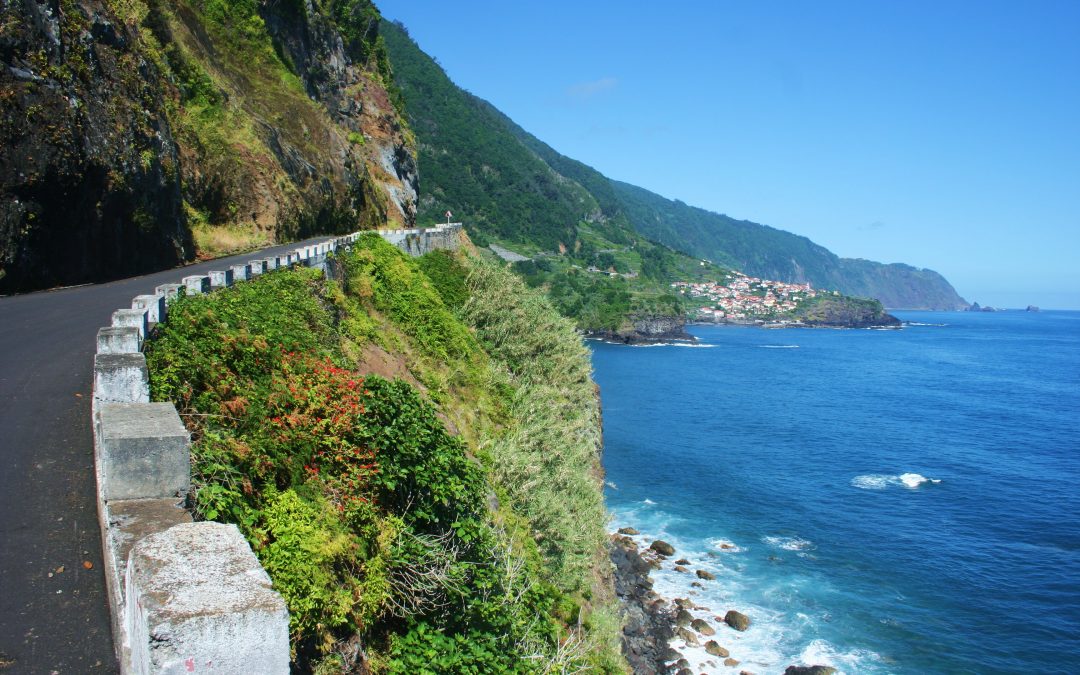 The island of Madeira is a reference point for all nature lovers. Madeira is full of lush green forests, including the Laurisilva forest ( UNESCO – world heritage), deep blue ocean views from most parts of the island with dramatic sea cliffs and a range of mountains and valleys. Among the many tourist spots, the west coast of the island stands out for its great diversity and is also the most popular for all visitors to the island. There a quite a few viewpoints that one can visit, varying from unique landscapes, green valleys, mountains, sea cliffs, waterfalls and traditional fishing villages, that reinforce the island’s natural beauty.

From all the high notoriety of places to discover on the west coast of Madeira a few of them is a must.  First on the list is  Cabo Girão, designated as the second-highest sea cliff in Europe and with a height of 589 meters, is currently one of the most visited tourist spots on the island. Second, Ribeira Brava translates as ‘the angry river’. In rainy seasons, the river had an extremely strong and powerful current, that often wreaked havoc over the entire eight kilometres of the route. Next, is the picturesque village of Ponta do Sol, considered one of the hottest areas of the island due to the number of hours of sun that it gets. From a more traditional point of view, the west coast of the island passes through Estreito da Calheta which represents an extremely agricultural area full of vineyards and banana plantations. In addition, this route passes by the most famous beaches of Seixal and Porto Moniz. Seixal beach stands out for being a black sand beach and Porto Moniz beach for being located on a unique rocky coast and is well known for its natural pools. Finally, the area of São Vicente, with the famous caves composed of an underground lava channel created by an eruption that occurred about 890 thousand years ago. They were the first volcanic caves to be opened to the public in Portugal and can be visited by following an underground footpath more than 1,000 meters long.

In short, we consider that this tour is undoubtedly aimed at people who like to escape the crowds, as well as those who wish to have a deeper contact with nature. The climate of the island provides a mysterious and tropical experience, and it is constantly changing according to the different parts of the island, and this is most evident on the west tour.

This highly recommended tour can be seen by organized Minibus tours or if you would like to discover the true nature with a sense of adventure, of the west coast, then the best way to see it is by a Jeep tour.

This website uses cookies to improve your experience while you navigate through the website. Out of these cookies, the cookies that are categorized as necessary are stored on your browser as they are essential for the working of basic functionalities of the website. We also use third-party cookies that help us analyze and understand how you use this website. These cookies will be stored in your browser only with your consent. You also have the option to opt-out of these cookies. But opting out of some of these cookies may have an effect on your browsing experience.
Necessary Always Enabled
Necessary cookies are absolutely essential for the website to function properly. This category only includes cookies that ensures basic functionalities and security features of the website. These cookies do not store any personal information.
Non-necessary
Any cookies that may not be particularly necessary for the website to function and is used specifically to collect user personal data via analytics, ads, other embedded contents are termed as non-necessary cookies. It is mandatory to procure user consent prior to running these cookies on your website.
SAVE & ACCEPT